MLK - Activism and the Arts on WBGO

This year’s discussion will focus on how Dr. King leveraged the influence of artists in the civil rights movement and how that legacy of activism in the arts continues today. Focusing on the long-standing connection between activism and artistry, participants will discuss how the struggle for social justice affected icons from Nina Simone to John Legend and how they, in turn, helped drive the struggle for social justice. 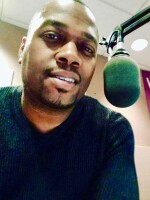 Stevan Smith
Brooklyn born Stevan Smith graduated from the exceptional Boys and Girls High School and attended the Earl G. Graves School of Business and Management at Morgan State University (Baltimore, MD), where he decided to switch to a path that would allow him to follow his passion for music. Introduced to Jazz music via Hip-Hop, Stevan started a radio programming internship at the MSU owned WEAA 88.9 FM, where he rose to Assistant Program Director. He then spent 12 years at WBGO as Traffic and Continuity Manager, where he contributed to the station's digital efforts, produced features for broadcast, and filled in as a guest announcer. For three years, Smith then served as Assistant Program Director at WNYC, during which time he continued to produce podcasts for himself and others. He returned to WBGO in 2021 as Chief Content Officer.
See stories by Stevan Smith
Jazz E-News Signup
Get the latest from WBGO right to your inbox: music, articles, events, discounts and more.