Trumpeter and professor Ingrid Jensen serves as Interim Dean at The Manhattan School of Music, and recently played alongside students as part of the Hugh Masekela Heritage Scholarship Concert, which took place just a couple of weeks ago at the school's Orto Center for Distance Learning and Recording Arts. From the concert, WBGO is presenting a composition by MSM student Lifa Arosa titled "For Hugh." The ensemble is made up of Ingrid Jensen and Nicolaus Gelin, trumpets; Simon Nyivan, alto saxophone; Adam Lamoureux, tenor saxophone; Lifa Arosa and Sityebi Mtoba, piano; Dylan Holly, bass; and Daniel Petersen and Kabelo Mokhatla, drums and percussion.

Logan Maxwell is a composer, bandleader, bassist, and arranger finishing his senior year at the Conservatory of Music at Purchase College. Having performed throughout the Westchester and New York areas, as well as near his hometown on Long Island, he is making his name known on the local jazz scene. He is a fellow at Ravinia’s Steans Music Institute in Chicago, and his debut album, Starting Point, was released last April. Additionally, he is beginning to enter the world of the big band. His senior recital will feature the Purchase Jazz Orchestra performing his own arrangements and compositions. The selection presented this week as part of WBGO’s Jazz Appreciation Month celebration comes from Maxwell’s album, and is his arrangement of Jimmy Giuffre's “Four Brothers." Fellow student musicians and engineers at the time of the recording include Josh Carter, Alex Smith and Nicholas Massimo on tenor saxophones; Lee Altsher-Wood on baritone saxophone; Harry Graser on piano; Simon Ribas on drums; and Ash McMillan and Sacha Meytin, engineers.

The William Paterson University Jazz Sextet, led by pianist and professor Bill Charlap, is one of 24 small groups that form the core of the school’s Jazz Studies Program. These students are also in other small groups, and all are also members of an 18-piece Jazz Orchestra that recently performed at Dizzy’s Club with Randy Brecker. They are: trumpeter Jonny Gittings (Cranberry, NJ); alto saxophonist Pat Gannon (Scotch Plains, NJ); trombonist Richard LaRouech (Aurora, NY); pianist Caelan Cardello (Teaneck, NJ); bassist Matt Holmes (Harpers Ferry, WV); and drummer Alberto Oliart (Mexico City, Mexico). Jonny Gittings is a senior trumpet major, doubling majoring in jazz and Music Education, and is the arranger for both songs we are featuring this week as part of our Jazz Appreciation Month celebration: Duke Ellington’s “Bojangles” and Kenny Dorham’s “Lotus Blossom.”

Edwardo Liberati Quartet, "When the Movie's Over" and "Lithium"

Siena Jazz University, in the small Tuscan town of Siena, draws students from around the world to study at the National Academy of Jazz, led by founder and director Franco Caroni. Pianist and composer Greg Burk currently coordinates the master's program, and the faculty consists of veteran jazz performers and educators from around the world, including trombonist Joseph Bowie. WBGO is featuring several ensembles from the school throughout Jazz Appreciation Month; this week we feature music from a returning student, guitarist Edwardo Liberati, who returned to his home country after studying at the Rotterdam Conservatory (“Codarts”) and living for five years in the Netherlands, while performing throughout Europe. His debut, Everyday Life, will be released this week. WBGO features two selections as part of our JAM celebration. “When the Movie’s Over,” featuring lyrics by Marta Donnini and vocals by Giulia Cianca, draws inspiration from the band Radiohead — and more specifically, from Brad Mehldau's version of their song "Exit Music (For a Film)." As for "Lithium," a swinging song in waltz time, it's inspired by the music of tenor saxophonist Mark Turner. 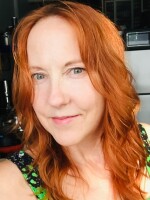