Few festivals named for a jazz legend uphold the legacy of their namesake quite as well as the Charlie Parker Jazz Festival, that’s presented by the City Parks Foundation and that closes out the summer jazz season in New York City. The core of this three-day event, celebrating its 30th anniversary, are the free outdoor performances held in Marcus Garvey Park in Harlem and Tompkins Square in the East Village, two of the many NYC areas that Bird frequented during those halcyon days of the 40s and early 50s. In addition, there are various events and shows held at The New School, the Jazz Museum of Harlem, and other locations. Among the performers at this year’s edition were Jazzmeia Horn and Her Noble Force, Archie Shepp & Jason Moran with Cecile McLorin Salvant, Terence Blanchard with the E-Collective and Turtle Island Quartet, Buster Williams and Something More, Nikara Presents Black Wall Street, and Vuyo Sotashe.

The programming of the festival reflects Bird’s influence on artists and groups more than 60 years after his untimely death. This year was the first live in-person edition of the festival since the pandemic and according to WBGO host Anderson who has emceed the stage in Marcus Garvey Park for more than 10 years, it was a special celebration because jazz fans and musicians look forward to the weekend, not only for the stellar talent that graces the stages but because it signals the end of summer. She also testified to the weekend being, as she called it, “a great jazz hang,” which after all is truly the hallmark of a special jazz festival.

“One of the good things about it being held at this park is that it is an amphitheater so there is plenty of seating and the large stage is attached to a recreation center that is air-conditioned,” Sheila explained. “Each year I can count on the recreation center that also serves as a green room to be packed with dignitaries and the ‘usual suspects’ to fill the room. This year was different. When I arrived, I was surprised at how few people, other than the performers, were in the center. Yet, there was a certain comfort in the intimacy and peace in the room. At one end I observed Buster Williams giving a lesson to one of his students. But then the bassist Jonathan Michel joined in the lesson. It was equally thrilling for me to see Buster coaching the student on how to play the bassline of his arrangement, a favorite of mine for ‘I Didn’t Know What Time it Was.’”

Sheila was pleased to see Kenny Barron and his wife there, because not only was his granddaughter Nikara Warren one of the performers, but Kenny and Buster were members of the Monk-dedicated band Sphere. “Though each group was well received, the audience gave Buster Williams a rousing applause with several standing ovations,” Sheila said. “Due to time constraints, he was not able to accommodate. The anticipation of seeing Terence Blanchard and E-Collective was undeniable and he did not disappoint. Like so many in the audience, I am happy when the festival begins and sad when it is over, we are there for the music and do not want it to end.”

Lee Mergner
For over 27 years, Lee Mergner served as an editor and publisher of JazzTimes until his resignation in January 2018. Thereafter, Mergner continued to regularly contribute features, profiles and interviews to the publication as a contributing editor for the next 4+ years. JazzTimes, which has won numerous ASCAP-Deems Taylor awards for music journalism, was founded in 1970 and was described by the All Music Guide, as “arguably the finest jazz magazine in the world.”
See stories by Lee Mergner 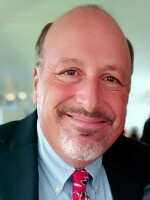 Jonathan Chimene
Long time music lover and WBGO listener, Jonathan proudly joined the WBGO team in Mid 2018.  He is a former collegiate and tournament tennis player – with international experience both as a player and a coach. Jonathan is a published photographer, who enjoys checking out jazz clubs and festivals throughout the world, and is a life-long, die-hard New York Mets fan. Raised in Central NJ but  after a long stint in Chicago, he has resided in Brooklyn for the past two decades.
See stories by Jonathan Chimene
Jazz E-News Signup
Get the latest from WBGO right to your inbox: music, articles, events, discounts and more.