On Friday, ECM Records made its catalog available on major streaming services, in an expansion of its partnership with the Universal Music Group. This made an ocean of material more widely available, including classical and world music.

But the trove is of special importance to jazz fans — like WBGO's music director, Gary Walker, and its director of programming, Steve Williams, who supersized this edition of Take Five with 10 tracks from as many unmissable ECM albums.

This 1972 recording not only demonstrates the absolute synergy of the right two musicians together, but also the meditative attraction of Manfred Eicher’s label, right from its beginnings. (Gary Walker)

On the afternoon of January 24,, 1975, Keith Jarrett arrived in the river city of Köln (Cologne), Germany on a difficult leg of a European tour made possible by ECM founder Manfred Eicher, who had driven Jarrett from one concert to another in a Renault 5 hatchback. In a just few hours he would perform the first-ever jazz concert in the city’s historic opera house. The compact travel accommodations had left Jarrett with an aching back, seriously lacking sleep. When he sat down to rehearse, the piano was substandard, and he refused to play it until the promoter convinced him to go ahead with the sold-out show after agreeing to several hours of costly instrument repairs. Once Jarrett (wearing a back brace) finally sat down to play at 11:30 p.m., he proceeded with a 66 minute, cascading and pivotal performance widely considered his most influential. Despite the earlier difficulties, he seemed to lose himself in the music, punctuating his breathtaking dynamics and improvisational flair on the piano with frequent moans, foot stomps and ecstatic vocalizing. (Steve Williams)

This is Pat Metheny’s coming out party, and it could only have happened under the inspiring and nurturing umbrella of ECM. Eicher had entrusted Metheny with the lead in four group projects prior to this, but now he would play all of the instruments as well as writing the music. A watershed moment in the Metheny story, because it’s a first reveal of things that made him famous: a multifarious nature and patented sensitivity, traits that are instantly recognizable today as “Metheny-esque.” (S.W.)

Haden and Gismonti were among the musicians who represented the first stable of ECM recording artists, and their singular artistry that played a considerable role in the label’s early popularity. By the time of this recording, at the Montreal Jazz Festival in 1989, the American bassist and Brazilian guitarist were already legendary. The nine tunes on the album capture the two in rare form. (S.W.)

In 1989, when saxophonist Charles really knew he wanted to return to visibility in music after two decades away, he came to ECM to express himself as a “Fish Out of Water.” Many sessions would follow, both introspective and outward-reaching. By 2004, Lloyd, considerably more comfortable with his surroundings, assembled a quartet for Jumping The Creek featuring the late Geri Allen on piano, bassist Robert Hurst III and drummer Eric Harland. (G.W.)

After gaining attention in bands led by Art Blakey, Charles Lloyd and Miles Davis, along with his own groups, Keith Jarrett came to ECM to face you all by himself. But I favor his trio work with bassist Gary Peacock and drummer Jack DeJohnette, here showing an enthusiastic Paris crowd in 1999 just how pretty three can be. (G.W.)

One of the shining aspects of the ECM legacy has to do with inclusion; musicians of all distinctions had the opportunity to play together, in limitless fashion. The label was at the forefront of showcasing women as leaders and influencers, and Carla Bley was its first female bandleader. This track comes from her 2000 release 4x4, which marked her 25th anniversary with the label, and features a chamber ensemble with players like organist Larry Goldings and her longtime partner, bassist Steve Swallow. (S.W.)

Among the musicians who embody ECM’s sonic ethic, Eberhard Weber stands near the top. Since starting his musical career in 1962, this German bassist has spent nearly 50 years as a leader or sideman for the label. In 2015 ECM organized a 75th birthday concert for Weber, featuring current and former label artists, including including vibraphonist Gary Burton, saxophonist Jan Garbarek, multi-reedist Paul McCandless — and guitarist Pat Metheny, whose half-hour suite is one of many extraordinary moments during this program. Although he was unable to play, Weber’s recordings and videos were featured, and he witnessed the entire concert from his seat with the audience. (S.W.)

Gary Walker
In jazz radio, great announcers are distinguished by their ability to convey the spontaneity and passion of the music. Gary Walker is such an announcer, and his enthusiasm for this music greets WBGO listeners every morning. This winner of the 1996 Gavin Magazine Jazz Radio Personality of the Year award has hosts the morning show each weekday from 6:00am -12:00pm. And, by his own admission, he's truly having a great time.
See stories by Gary Walker 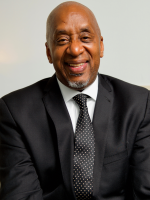