Sometimes out of inexplicable loss, new beginnings are miraculously born. The will to survive sparks a deeper understanding of one’s own strength and spiritual drive. Alto saxophonist Bruce Williams’ Private Thoughts is a testament to this notion.

“God, music and my wife saved me,” reflects Williams, who credits his mom for being his ‘rock’ following the suicide of his father, Kenneth Ferrell, close to 30 years ago. Private Thoughts affirms that at the core of Williams’ music and life are the principals of perseverance, commitment and redemption.

“I am thankful to Oliver Lake who granted me the artistic freedom to present this music,” shares the William Patterson alumnus.  Williams calls upon eight musicians who are brothers on and off the bandstand: trumpeters Freddie Hendrix and Josh Evans, pianists Brandon McCune and Alan Jay Palmer, drummers Vince Ector and Chris Beck, bassist Chris Berger and guitarist Brad Allen Williams.

The intense call of Williams’ laser-focused alto opens the CD summoning Evans, Palmer, Ector and Berger for the unrelenting expedition of “Mata Leon.” A black belt in Brazilian Jiu-Jitsu, Bruce named the tune after a chokehold. The melodic and soulful title track follows, uniting Williams with the rhythm section of McCune, Berger and Ector.  “He was a hard working, compassionate and good man” shares the DC native and NJ/NY based saxophonist of his father, who fell into depression following heart complications.  The spiritually attuned saxophonist had visions prior to his father’s passing. With a sextet, Williams and Evans weave their way through the trippy Miles Davis/Wayne Shorter-esque “Premonitions.”

The introspective “Forever Asking Why” features the sublime piano of Palmer, and the hard-bop fiesta “Old Forester” highlights trumpeter Freddie Hendrix. The latter finds Bruce recalling his dad’s love of libations and old westerns. “Last Visit In The Mirror” recounts a visit from Bruce’s father after his passing and shortly after his son Elijah’s birth. The tour-de-force “The Void” highlights Williams’ impassioned soprano alongside the levitating and telepathic interplay of Evans, McCune, Berger, Brad Allen Williams and Ector. “The Price We Pay For Peace,” showcases Bruce’s stunning and contemplative soprano, while the gospel-tinged “I Still Carry On,” transforms suffering into salvation, and then segues into the arresting “View Through A Sheet,” transporting us into the depths of despair.

It is fitting that Private Thoughts closes with the forward momentum of “Past Tense.” “I’m not done yet,” declares Williams. “I dial up the creator and just go for it. Working from struggle and then emerging in the light, you must believe there are brighter moments ahead.” 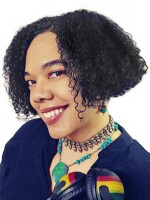 Monifa Brown
Born of Ukrainian Jewish and African-American descent in Brooklyn, NY, Monifa Brown's (formerly Carson, happily married and the proud mother of a wonderful son – who can be heard in some of Brown’s WBGO show promos) affinity for music began at an early age. "I am blessed that my parents were determined to expose me to the arts and jazz in particular. They would take me with them everywhere. The first time an irrepressible mark was made was when they took me to hear Miles Davis. His presence and sound were mesmerizing. Miles was magical and I was instantly hooked."
See stories by Monifa Brown
Jazz E-News Signup
Get the latest from WBGO right to your inbox: music, articles, events, discounts and more.