The Woodshed Network, a mentoring program for women in jazz, extends deadline for submissions

Over the last four decades, Dee Dee Bridgewater has forged a remarkable career as a vocalist, bandleader and actress. A multi-Grammy award winner, Bridgewater brings not only formidable chops but also a unique charisma to every performance, no matter what the setting. Almost entirely self-taught, she’s had a few mentors along the way, although mostly older and accomplished jazz men, rather than her fellow women in jazz. Bridgewater herself has paid it forward as a mentor of many young jazz women, as well as a frequent participant in the Jazz Ahead program started by Betty Carter and now hosted and produced by the Kennedy Center. However, she came to feel that there was a need for a different mentoring program, entirely focused on women in jazz.

Seeking a solution to this void in the jazz community, Bridgewater conferred with her daughter Tulani Bridgewater-Kowalski, who is also her manager, and in 2019 the two created The Woodshed Network, an organization that not only hosts an intensive 10-day program to mentor young jazz women, but also offers support and guidance throughout the year, and in some cases, for years. Amongst the “graduates” of the program are Lakecia Benjamin, Sarah Hanahan, Akua Allrich, Candice Hoyes, and many other emerging artists who have gone on to successful careers in the often challenging jazz community.

Now in its fourth year, the organization has extended its deadline to November 23 for admission into the program being held virtually February 27 – March 20, 2023, under the auspices of 651 Arts in Brooklyn. More information, including informative videos answering various questions about the program, can be found at The Woodshed Network’s website.

This powerful duo of Bridgewater women spoke with WBGO’s Lezlie Harrison about the creation and evolution of this unique mentoring program.

Dee Dee Bridgewater: I learned by doing it, but I had some wonderful male mentors. I didn't have female mentors. When I would run into other singers who of course were more established, they would share little tidbits with me, but it wasn't like a real community. As I was always working in a male-dominated space, those were the people that I was around. I was mentored by a lot of men who we consider our legends today. Ray Brown was very influential, very concerned with finances. He always wanted to make sure that all of the musicians that worked with him, including myself, had their finances in order and had started pensions. He was really on that. By the time we were working together, I already had all of that together. My stepfather helped me create my own corporation. He was the one who told me that I needed to have a small business corporation and then he helped me to set it up and in the first years he was the secretary and the accountant and sometimes my mother would come in.

We were really a kind of mom-and-pop thing, in the beginning. I was always curious. I was always asking questions and I also had the benefit of working with more established musicians. I could see the difference between those who had set their affairs in order and were on the road, and those who were going from gig to gig. Very early on, I did not want to be the gig-to-gig person. I knew very early on I did not want to have a career that was based only on that. That was because I was exposed to a lot of different levels of the jazz career. And I had a mother who was insistent on me doing things like getting my insurance together.

As far as taking care of business, I would say that I was self-taught. I didn't go to school. Everything I learned, I’ve learned through experience and being around people who were willing to share with me. But what I've found through the many years of my career is that there is a lack of sisterhood and I wanted to create that for younger musicians. There are a few women that I can reach out to, but my sisterhood is with my daughter Tulani and my daughter China. I just thought it was really important to create this kind of network and community.

I've been mentoring young people for a very long time now, but I think something happened, like when the whole Me Too movement started and I was like, “Hmm, what about that.” I knew that as a Black woman, we have our set of issues. I was really concerned from that perspective. Being a Black woman in the music industry, being a Black woman who would have to go into record meetings with the recording company and I would be the only woman in the room and learning how to navigate that and learning how to maintain my femininity, in the way that I identify and still be able to do business with individuals who wear pants and think in the male fashion. So I was always having to navigate. I thought that it would be good to put this mentoring program together with Tulani so that we could help women and create this movement.

How do women get involved in The Woodshed Network?

Tulani Bridgewater-Kowalski: I'm so glad you asked that question for two reasons. Number one, it allows me to point you to our website, which is woodshednetwork.com, because I recently actually recorded some videos that answer some of those questions because a woodshedder is a lot of things, and that's part of the beauty of it.

Really it's about a self-identifying woman who is committed to having a career in the community of jazz. Who is at a point where perhaps you have a little bit of experience, but you don't have enough to get yourself to the next phase of your career. Perhaps you have interest from a label, but you don't have representation. Perhaps you have an agent, but it's not the right agent. Or you've been creating your own material but you haven't properly figured out how to register it and protect your rights with your own material. There are a lot of different woodshedders and part of the beauty of it is it's diverse. We have had women of various ages and stages.

You can be of any age, any ethnic background, any educational background. There's no requirement that you have to come out of a conservatory program or anything like that. And because we're virtual again, you don't have that logistical problem of having to be someplace. During that time, obviously you have to commit to our time. The program runs from February 27 to March 10, 2023, which bridges Women’s Month and Black History Month on purpose, because we're celebrating both.

TWN - Who is The Woodshed Network for?
Tags
Music Dee Dee Bridgewater 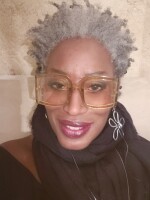 Lee Mergner
For over 27 years, Lee Mergner served as an editor and publisher of JazzTimes until his resignation in January 2018. Thereafter, Mergner continued to regularly contribute features, profiles and interviews to the publication as a contributing editor for the next 4+ years. JazzTimes, which has won numerous ASCAP-Deems Taylor awards for music journalism, was founded in 1970 and was described by the All Music Guide, as “arguably the finest jazz magazine in the world.”
See stories by Lee Mergner
Jazz E-News Signup
Get the latest from WBGO right to your inbox: music, articles, events, discounts and more.