Officially known as “The Islamic Society of Essex County,” this space was donated to the Muslims of Newark decades ago in 1982. The mosque was sold last year without community knowledge. Faith-based places are integral to the vibrant city of Newark. People from different social-economic levels, racial backgrounds, and ages come together to worship and serve the community. This is all the reason why what’s happening with the mosque on Branford Place, downtown Newark, is disheartening to many community members.

Muslims make up 3% of religious affiliations in New Jersey, which is likely a more conservative number, ranking #1 in the nation in the percentage of its population. There is a longstanding history of faith-based movements and civil rights being intertwined with Muslims in Newark. The Moorish Science Temple of America was first established in Newark in 1913 by Noble Drew Ali. It has been reported that there was a place of Muslim spiritual practices at 181 Warren Street in Newark in 1920.¹

Immediately, local Newark Muslims and community members of other faiths sprang into action, protesting, creating online petitions, and social media awareness about the injustice committed against fervent Muslims and community members. On January 16, 2021, Rutgers School of Law-Newark student, Saad Admani spoke about why this space is vital to the community on the weekly Saturday protest and a message of perseverance in the fight for justice.

The protests are an open forum for individuals who want to speak out against the injustice and how it impacts them, their families, and the community. One protester who regularly attended the mosque, speaking in the Arabic language, spoke scathingly against the Board. One of the things she mentioned was that the board did not notify the community that any issues would cause them to sell the mosque suddenly.

Muslim students who attended Rutgers University-Newark, New Jersey Institute of Technology (NJIT), Seton Hall University, Essex County College, and Berkeley College would attend Friday (Jummah) prayers at this location due to its proximity. There were also notable Muslims who have frequented Branford Place mosque, including U.S. Olympic fencer Ibtihaj Muhammad, Imam Heshaam Jaaber, who led the prayers at Malcolm X’s funeral in 1965. International spiritual leaders and diplomats who were visiting United Nations in New York City have frequented this mosque due to its closeness to Manhattan.

This local mosque served as a place of worship and an educational resource, networking, and a place many Muslims could be fed during Ramadan and clothed throughout the year. It indeed functioned as a microcosm of Newark.

Though the mosque was sold under the pretense that it did not function as such, thousands of Muslims can vouch otherwise, as pre-COVID, the five daily prayers were performed in this mosque every day since its inception. Some may presume that the board took advantage of the situation due to the pandemic. New Jersey State law requires any church or religious organization to have a public meeting before selling any real estate. The judge who ruled in favor of selling the masjid mentioned that she does not find this space to be a mosque because it does not have things commonly attributed to a mosque.

Amongst Muslims around the world, it is understood that mosques take different forms, and it is nearly an abstract designation for a space according to Islamic law. Some mosques are merely mud walls and dirt floors with no roof.²

How can this kind of egregious thing that seems to happen in minority communities be prevented, one may ask themselves? Community members say those who sit on the boards of community ran organizations and spaces should be required to inform city residents of progress and changes (i.e., transparency). There must be enforcement of local government-sanctioned protection for communities. Another demand is that board members host monthly meetings with the community to increase accountability.

“there has to be transparency. There have to be members on the board of directors, board of trustees that are members of the community” said Admani. 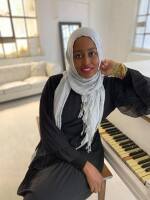