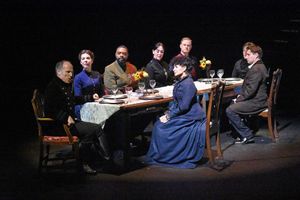 About Owen Wingrave
In Benjamin Britten's hauntingly intense opera based on a ghost story by Henry James, Owen Wingrave sets a young man's scruples and beliefs against the fanaticism of his family. Wingrave is a young man who comes home to confront his family and rebel against its military past. The ghosts of his ancestors and a dark secret haunt all the inhabitants of the Wingrave home. Britten's powerful score etches strong individual voices caught within a fraught atmosphere. Originally commissioned by the BBC, it premiered on television in 1971, and was subsequently performed at Covent Garden in 1973. This production will be part of the Fourth New York Opera Alliance Opera Fest.

The New York Premiere of Owen Wingrave was originally presentedat GK Arts Center from May 9-12, 2019.

About Piramo e Tisbe
Based upon the story of Pyramus and Thisbe from Ovid's Metamorphoses with a libretto by Marco Coltellini, Piramo e Tisbe is byJohann Adolph Hasse, a pivotal opera composer ofthe 18th Century celebrated for hissweet and tender melodies. Sung in Italian with English supertitles. A wall and family feud stand between Pyramus and Thisbe. Their secret plans to unite unravel under the moonlight. Conducted by Elliot Figg, directed by LOTNY Artistic Director Philip Shneidman, with set design by Neil Patel  (Alcina at Washington Opera, The Crucible at The Glimmerglass Festival) and Cate McCrea, costume design by Lara de Bruijn (Roméo et Juliette at Castleton Festival, Alcina at Boston Conservatory), lighting design by Grant W.S. Yeager (What We're Up Against at Women's Project Theater),and projection design by Alex Basco Koch. Featured in the cast are mezzo-sopranos Sarah Nelson Craft and Kristin Gornstein as "Piramo,"sopranos Summer Hassan and Kelly Curtin as "Tisbe,"and tenors Glenn Seven Allen and Brian Downen as "Padre," with actors Giovanni Da Silva and Hunter Hoffman.

About L'Amant Anonyme
L'Amant Anonyme is an original adaptation of an 18th century opera by Chevalier de Saint-Georges that incorporates the swashbuckling biography of the composer into the performance.

One of the earliest composers of color, Saint-Georges rose to fame in the period before the French Revolution. The narrative of the original opera tells the story of a lover who is afraid to reveal his true identity to the object of his affections. With a mixture of singing in French and dialogue in English, the produc