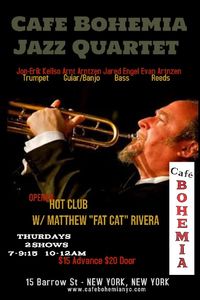 Trumpeter Jon-Erik Kellso has been leading The EarRegulars featuring guitarist Matt Munisteri and various guest artists at the Ear Inn on Sunday nights since 2007. On Mondays and Tuesdays Jon plays with Vince Giordano's Nighthawks at Iguana on West 54th Street. Aside from these steadies, Jon can also be seen performing at all the great NYC venues, including Dizzy's Club Coca-Cola, Birdland, the Blue Note, the Iridium, the Jazz Standard, Small's, etc.

Jon-Erik can be heard on several television and movie soundtracks, including “Ghost World,” "The Aviator," "The Good Shepherd," "Bessie" and "Mildred Pierce" with Vince Giordano's Nighthawks. He can be seen and heard in "Revolutionary Road," and in the HBO series, "Boardwalk Empire," for which the Nighthawks won a Grammy.

About Hot Club:
In the 1930s, French record collectors and enthusiasts of le jazz hot began record listening groups under the name of the Hot Club of France, a major institution of jazz listening and appreciation in Europe when rare imported records were scarce and threatened by the eminent rise of Fascism. Listening to a record was a communal and rarified ritual, replete with the fun of discussion and replay.

Hot Club brings the experience of these original listening sessions to any venue or occasion. Hosted by DJ and jazz expert Matthew “Fat Cat” Rivera (WKCR-FM), Hot Club plays classic jazz recordings from the 1920s-50s from original 78rpm pressings in their finest sound. The Fat Cat brings his years of jazz research and collecting to each set, offering a chance to hear scarce records in a thoughtful, beautiful and relaxaing presentation.